Growing up, Alexis Nicole Zallas ’13 always looked forward to movie nights with her father. The pair would grab bowls of ice cream and curl up next to each other to watch old western films. But it wasn’t the star-studded cowboy John Wayne who captured Zallas’ heart; she fell in love with the horses.

“Horses are beautiful creatures and they just drew me in completely,” Zallas recalls, with the same enthusiasm she likely had as a kid. “It didn’t take long before I told my parents that I wanted to be a veterinarian when I grew up.”

Though her parents figured that she, like most kids, would move on to something else, they still looked for opportunities for their daughter to explore her newfound passion. Living in the Boston suburb of Lexington, they turned to Drumlin Farm and the Massachusetts Audubon Society—because Zallas wouldn’t have been happy simply watching animals on television or looking at them from afar at a zoo.

“I wanted to be able to touch horses, sheep, chickens, and goats—any kind of animal,” she says of her field trips. “I was also fascinated that injured animals could find a home there in order to live out their days, safely, at the Audubon wildlife reserve.”

To her parents’ surprise, Zallas never gave up her dream to become a veterinarian. In middle school, her favorite science class included dissecting a goat heart. “We got to stick our fingers in the different major vessels leading into the heart,” she recalls. “It was so cool.”

During high school, she enrolled in pet first-aid classes at BluePearl Specialty and Emergency Pet Hospital (then Veterinary Emergency and Specialty Center of New England). “I remember going to the teacher and telling her that I wanted to be a vet someday and asking if I could volunteer at the hospital,” Zallas says. “I was so happy when the answer was ‘yes!’”

A short while after, Zallas got to observe an emergency surgery—dressed in scrubs, a mask, and booties with strict instructions: Don’t touch anything blue. Sit on the floor if you feel faint.

But she didn’t feel the least bit nauseous or woozy. Instead, she realized, “This is where I want to be. I was sucked in.”

Throughout high school, Zallas continued to volunteer in the animal hospital’s surgery department observing technicians, learning how to sterilize and handle instruments, and practicing proper scrubbing techniques at the sink. “If they needed to set up a catheter, I would run to grab the supplies. I had all these really awesome opportunities to observe and learn firsthand with the surgeon standing right in front of me.”

Animals are so different from the human species: They don’t look like us, they can’t speak like us, and yet they have incredible function in this world … And without saying anything, they teach us lessons in unconditional love and acceptance.
Alexis Nicole Zallas ’13

With her sights set on veterinary school, Zallas enrolled at Regis to complete an undergraduate degree in biology. In addition to Regis’ location, which allowed her to keep costs down by commuting from nearby Lexington, one of the main reasons Zallas chose Regis was because of the size. “I like to ask a lot of questions; it’s how I learn. I wanted to get information from the most correct source I could, which is a professor. Other schools had such big classes, but I knew at Regis I’d have the opportunity to get that one-on-one support from the faculty instead of just being a number.”

As she got more in-depth into science at Regis, Zallas says she fell in love with microbiology. “I became fascinated to learn about things I couldn’t see. Every single day we take for granted how much our body does for us, often complaining about what goes wrong. But what about the number of cellular processes and microscopic functions that are happening in our body on a daily basis that actually function correctly? It’s amazing.”

Her curiosity for how things work is rooted in time spent with her father, who she says was committed to teaching her how to be self-sufficient. He would bring Zallas into his woodworking workshop where they would sketch out and measure shapes for their projects (among them a birdhouse and covered wagon replica for a school assignment), then guide her on how to safely use each machine.

“My father taught me that with knowledge, I can be successful, even in fields that are typically male-dominated,” Zallas says. “Part of that translated to my desire to solve problems and pursue an education in science and medicine.”

Through these kinds of projects, Zallas also developed a better understanding of her learning style. At Regis, she would read whole chapters then make summaries and draw pictures about cellular processes, for example. And, clearly, it worked: Zallas was in the Regis Honors Program (see sidebar on page 26) and was valedictorian of her class. Yet she admits that her first semester at the University of Missouri College of Veterinary Medicine was still a bit of a shock.

“A lot of people liken the vet school curriculum to trying to drink water from a firehose—you just can’t absorb all the information at once. And that is what it was truly like.”

Most of the time, she was in class from 8 a.m. to 4 p.m. five days a week. On nights before a test, she got little rest—studying, sleeping for a few hours, then waking up at 3 a.m. to study some more. Though clinicals also required long days, Zallas didn’t mind because it meant she could interact with the animals.

Living in the Moment 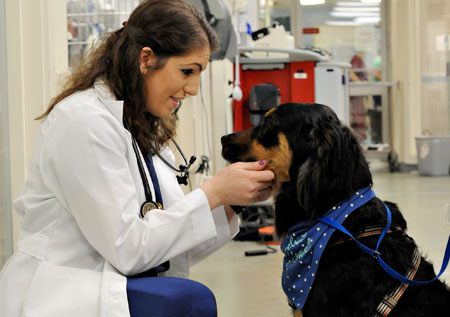 Throughout her time at Regis and veterinary school, Zallas continued to volunteer and intern at BluePearl Specialty and Emergency Pet Hospital. After earning a Doctor of Veterinary Medicine degree in 2017, she went on to complete a one-year post-doctoral internship before officially joining the BluePearl Specialty and Emergency Pet Hospital team to provide emergency care to small animals.

Though it is admittedly one of the toughest places to be—with regard to treating beloved pets that often have life-threatening illnesses or injuries—she enjoys the opportunity to teach people about different diseases. Her ability to build a personal rapport with pet owners she is meeting for the first time is something she credits to Regis.

“Growing up in a Greek family, I often stayed in my bubble and was even a bit socially awkward,” she admits. “I was astounded by how multicultural Regis was—with so many international students and people from all different backgrounds. That, coupled with small classes that required a lot of talking, collaborating, and group projects, is what helped me learn how to quickly build relationships with my clients in the ER.”

During her shift, Zallas never knows what kind of injury or illness will come through the door, whether it be a cat with cancer or a limping dog. Though it’s what she loves about her job, it is also one of the challenges of emergency medicine. “I can go from one room where people are happy to another room with people who are crying.”

She is candid about how this can make the job emotionally difficult. Compassion fatigue—a condition prevalent in both human and animal medicine—can result in a deep physical, emotional, and spiritual exhaustion accompanied by acute emotional pain, according to the American Academy of Family Physicians.

“Part of it is mind over matter,” she says of staying balanced, noting that self-care was part of the vet school curriculum. Her philosophy is similar to a dog’s—she tries to live in the moment. “I would describe myself as a happy-go-lucky puppy. I’m just happy to be working as a veterinarian with people I really like and can learn from.”

Zallas also relishes moments that keep her connected to her Hellenic culture. Thanks to her mother, she loves cooking Greek food. She sings in the Odyssey Greek Orchestra alongside her father, and she is a member of the Sons and Daughters of Alexander the Great Greek Dance Group. And throughout her studies, she has realized medicine’s strong connection to Ancient Greece.

“I am part of thousands of years of an amazing culture, and I am extremely proud of my ancestors.”

“Animals in their purest form will be kind to you if you treat them nicely,” Zallas says. Her preference for animals comes from a place of utter respect. “Animals are so different from the human species: They don’t look like us, they can’t speak like us, and yet they have incredible function in this world—like producing milk or pulling a cart. And without saying anything, they teach us lessons in unconditional love and acceptance.”

Though Zallas isn’t currently a pet owner (“I’m in the market!”), she respects the fact that the small animals she treats are cherished members of their owners’ families. It’s one of the things that makes her job so special.

“I consider it a good day when people extend their hand to thank me for doing such a great job,” Zallas says. “It’s really rewarding to know that what you do is valued and appreciated.”

She pauses as she considers the most memorable moment thus far in her career. Hard-pressed to identify a single case, she says, “It’s gratifying when I examine an animal, diagnose the problem, successfully treat, and watch them walk out the door—healthy again or at least on the road to recovery. That, and the happiness on their owner’s face, is pretty magical in my mind.” 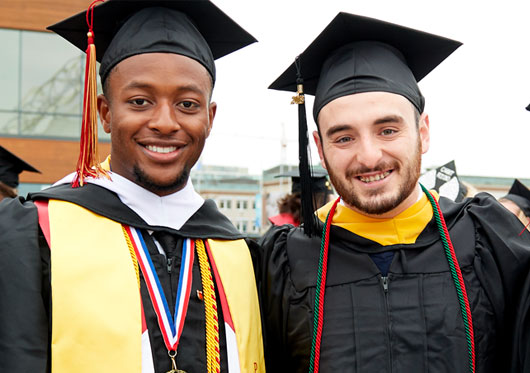 The Honors Program at Regis College is an invite-only opportunity for exceptionally talented and academically qualified students. Honors courses are taken for credit and students participate in a number of rewarding service engagement projects.

In addition to an academically rigorous honors curriculum, the Regis Honors Program includes participation in community leadership, service, and opportunities for personal development through mentoring relationships. It was founded in 1994 by Associate Professor of Humanities Ernie Collamati, PhD.

“Students who participate in the Honors Program have told me that they receive so much more from participating in the service component of the program than they could ever give,” says Honors Program director Sister Mary L. Murphy, CSJ. “For many, it is life-changing.”

Alexis Nicole Zallas ’13 says her favorite part of the Honors Program was a service project presentation she completed for the honors course “Contributing to the Common Good.” The focus: her experience as a volunteer at BluePearl Specialty and Emergency Pet Hospital (then Veterinary Emergency and; Specialty Center of New England).

“By helping keep animals healthy or making them well again, I was also influencing the well-being of humans. Studies show that owning a pet helps lower blood pressure and stress levels, promotes exercise, and provides social and emotional support,” Zallas says. “I also expressed the importance of animal advocacy, as they don’t have a voice of their own.”

Sister Murphy taught the course in spring 2019. “Contributing to the Common Good is designed to explore factors influencing one’s choice to serve the common good, including the range of opportunities available and the gifts, sacrifices, and tradeoffs involved in choosing to devote oneself to the common good.”

The interdisciplinary nature of the symposium, Sister Murphy adds, helps students develop a comprehensive understanding of personal, local, national, and global considerations involved in serving the common good. “From Aristotle and Socrates to Hamilton and Jefferson, from the Lay Apostolate to the Peace Corps, from the contribution of women religious to the church and the world, to living the mission of the college, we have discussed it all. The call to service is a call to be fully human.”