The Fine Arts Center bustles with activity throughout the academic year and is the home of multiple theatre, dance, and music productions, as well as on-going revolving exhibits in The Carney Gallery.

Between the River and the Forest 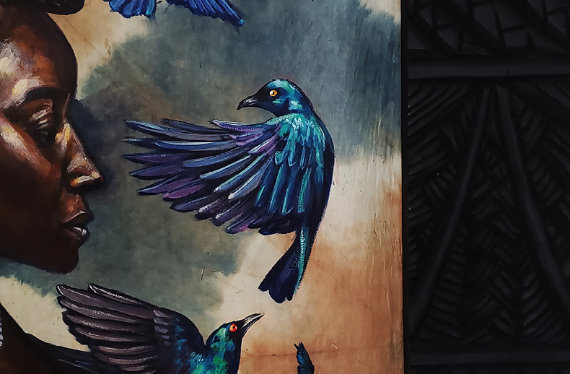 Between the River and the Forest is an exploration of masculine and feminine power symbolism heavily referencing traditional and pre-colonial African art and iconography. In many African spiritual traditions, the River and the Forest are the abodes of powerful female and male coded spirits, whose power permeates throughout the physical and metaphysical world. The show's title reflects common themes in West African spirituality, material culture, and folklore. The waters are home to powerful feminine forces, both beneficial and ominous. They can represent fertility, abundance, wealth, and the ambivalent nature of water as both life bringer and life taker.

Conversely, the forest/bush becomes the domain of the hunter and masculine forces of fire, iron, war, and aggression. These forces govern assertiveness and ambition and are simultaneously destructive and generative. These energies are not bound to western notions of gender or gender roles. They are fluid, dynamic, and are embodied in numerous, complex ways in the visual and verbal expressions of Black peoples throughout time and space.

Each monumental installation incorporates traditional West African weaving dyeing and woodcarving techniques. The works depict contemporary Black subjects using these ancient sensibilities. The images are the results of both research into the African past and conversations about issues of identity and representation with participating models.

Stephen Hamilton is an artist and arts educator living and working in Boston, Massachusetts. Stephen’s work incorporates both Western and African techniques, blending figurative painting and drawing with resist dyeing, weaving, and woodcarving. Each image is a marriage between the aesthetic perspectives and artistry of both traditions. As a Black American trained in traditional West African artforms, he treats the acts of weaving, dyeing, and woodcarving as ritualized acts of reclamation. He uses traditional techniques and materials native to West Africa to reclaim ancestral knowledge dissociated from Africans in the Americas, during the transatlantic slave trade. The work explores and heavily references the Black body in pre-colonial African art history, creating visual connections between the past and the present. This forms a body of work, which serves as a conceptual and visual bridge between the ancient and modern worlds. Through this, he explores elements of black identity through time and space on its own terms.

Through visual comparison of shared philosophies and aesthetics amongst Black peoples, he seeks to describe a complex and varied Black aesthetic. These visual and philosophical connections and cultural analyses form his visual language. The pieces created depict African thought and culture as equal to, yet unique from, its western analog. This work stands in stark contrast to the pervasive negative associations, which have become synonymous with Black culture. His work, therefore, bridges dialogue between contemporary Black cultures and the ancient African world through an asset-based lens.