“I remember when we were planning the campaign—deciding on an ambitious goal—and when we landed on $40 million, many said we would never achieve that amount,” recalls Regis President Antoinette M. Hays, PhD, RN. “I always knew we would.”

Publicly launched in 2017, Now We Fly exceeded the $40 million mark two months ahead of schedule at the university’s Let It Shine Gala on October 23, 2019. A comprehensive campaign, Now We Fly comprised four main funding priorities: capital projects, endowed scholarship support, academic initiatives, and annual support. Prior to Now We Fly, the largest Regis campaign was $16 million in 1994, which included the building of the Fine Arts Center. At more than double that amount, the $40 million goal was ambitious, but university leadership was confident it was attainable.

“This campaign has been a game-changer for Regis,” says Board of Trustees Chair and Campaign Co-Chair John Tegan. “We really needed to prove to ourselves—and to the world—that Regis could raise these significant funds, especially amid headlines of small colleges closing their doors. It has been all about building a stronger culture of philanthropy for an institution that has been flying under the radar for years; we did that successfully and Regis is stronger than ever before.”

“When I became president of Regis, I knew the university had such great, untapped potential,” says Hays. “Regis has been making a significant impact in Greater Boston and around the world for years, and Now We Fly was all about telling the Regis story—being bold not only in our efforts to raise significant funding, but bold in shining a bright light on the great work we were already doing.”

In today’s higher education climate, shining that light is more important than ever. Since Hays took the helm in 2011, Regis created two additional schools (and now has a total of four schools) and has greatly expanded its focus in nursing and health sciences at the undergraduate, graduate, and doctoral levels. And in 2017, Regis took its next big strategic step when the university launched fully online degree programs, expanding its target market and geographic reach beyond the campuses in Greater Boston. This expansion translates to an overall enrollment that has increased by about 75 percent since Hays became president nine years ago.

It’s the increase in enrollment revenue coupled with campaign investments that has built Regis’ recent success and solidified its future.

“Now We Fly was a revolutionary campaign for Regis—I remember thinking ‘it’s now or never,’” says Hays as she recalls the planning stage of the campaign. “We had a strategic vision for the university, but we knew it wouldn’t come to fruition without significant funding. Our success really hinged on two things happening simultaneously—unprecedented campaign support and a significant shift in our enrollment and programs. Regis is thriving today because we were successful in achieving both of these things.”

Hays isn’t shy about noting that although Regis is certainly “flying” with the completion of the campaign, this is just the beginning.

“Regis still has so much growth potential, especially in STEM,” she says. “As Regis looks toward the future, science is, and must continue to be, at the forefront.” 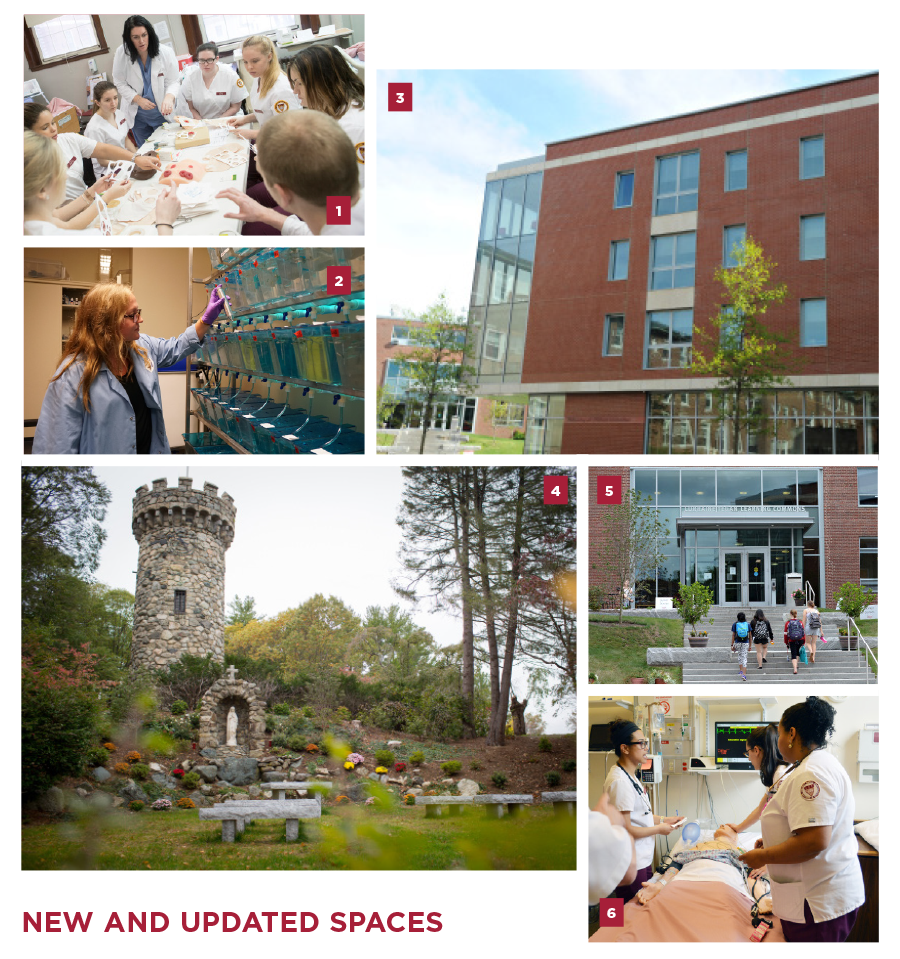 Through a generous grant from Cummings Foundation, the Regis Nursing Resource Center in College Hall is a supportive environment for nursing students to study and collaborate.

Regis students have been conducting research in the on-campus zebrafish facility since 2018 thanks to campaign grant support from Virginia Pyne Kaneb ’57 and others, as well as a partnership with Boston Children’s Hospital.

Thanks to the support of Eileen McCormick Langenus ’78 and Peter Langenus, trustee, and Farrah and Hans Christensen, trustee, the grotto (between the Tower and Walters Hall) was restored and is used for campus gatherings as well as quiet reflection and prayer.

Board of Trustees Chair John Tegan made a gift to name the Tegan Commons in honor of his late wife, Lorraine DeStefano Tegan ’63.

The campus quad is a vibrant centerpiece for campus life, often used for group study, community events, recreation, and outdoor classes. The Luben Plaza is between the quad and St. Joseph Hall, and was named in 2015 in honor of Mary and Joseph, parents of Patricia Luben O’Hearn ’64. 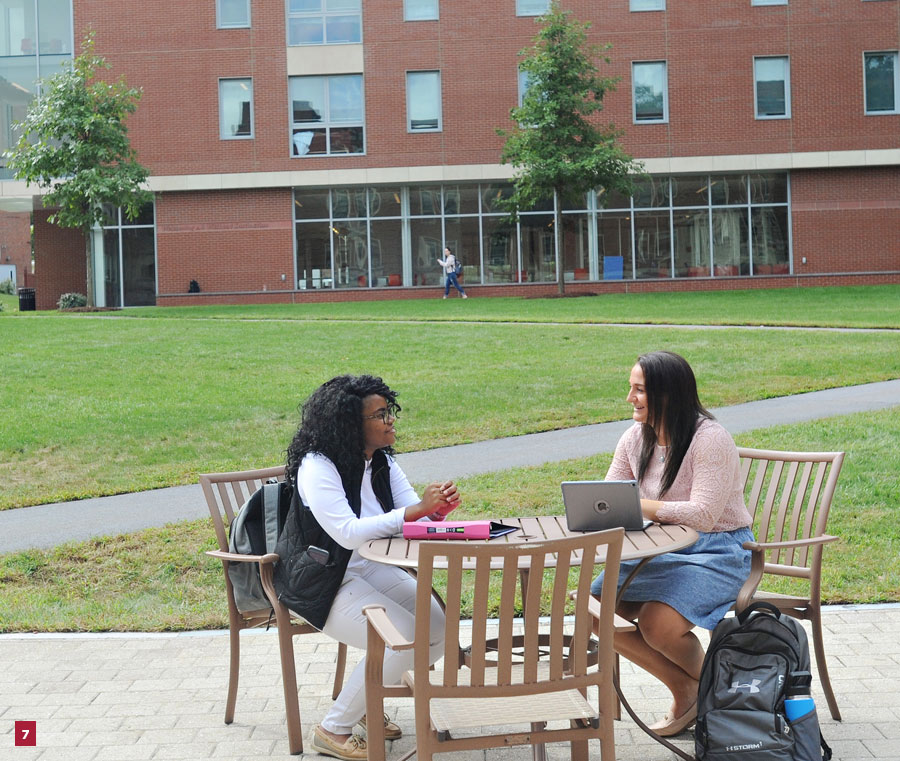 Significant funding from Now We Fly was, and continues to be, invested in student scholarships and financial aid. Read more about some of the students benefiting from campaign support. 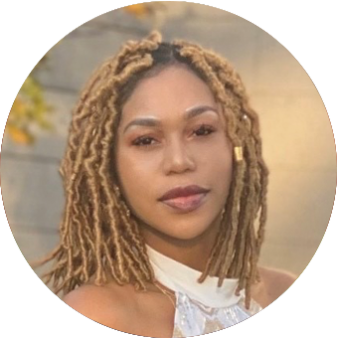 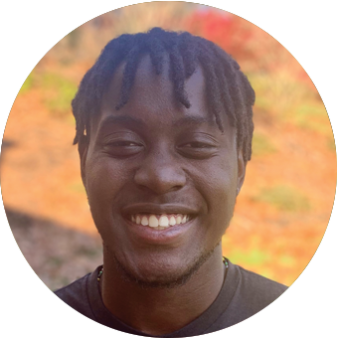 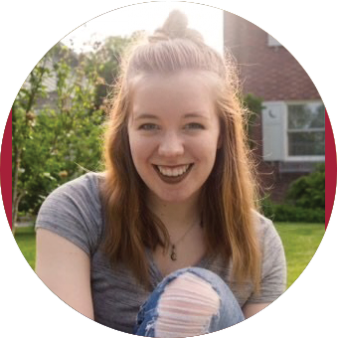 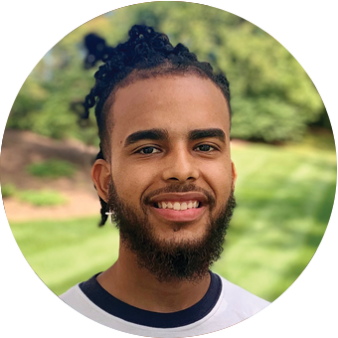 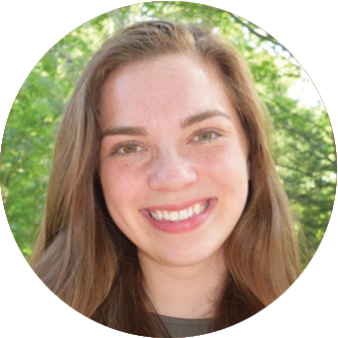 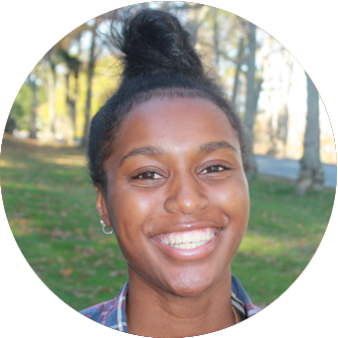 Impact of the Now We Fly Campaign: Gifts and Grants to Regis FY07 to FY19 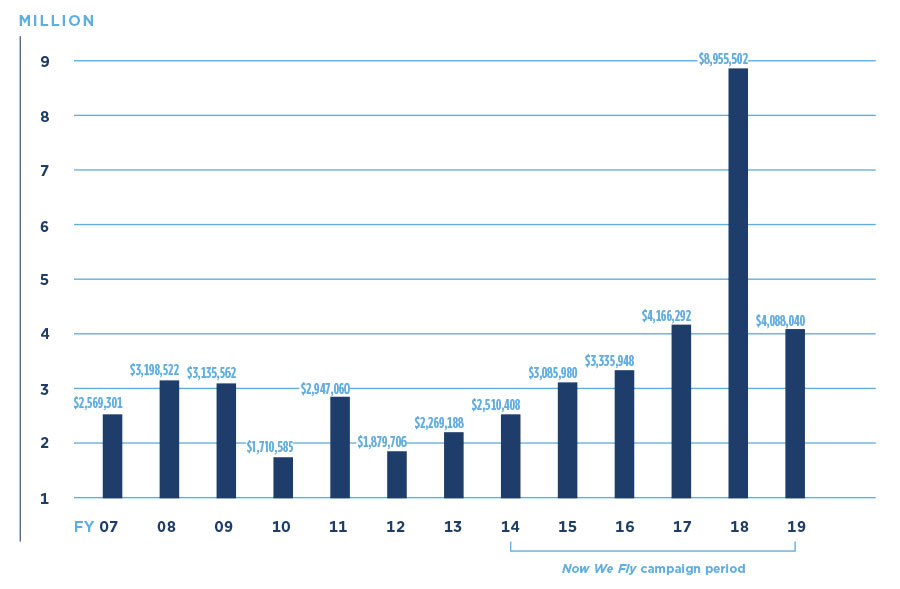 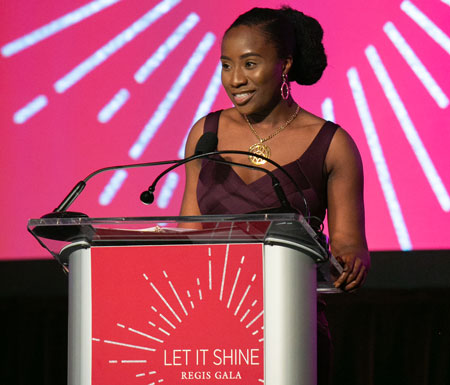 The Regis scholarships I received allowed me to pursue my dreams of higher education. During my senior year, I had the opportunity to work in the Regis zebrafish facility. Today, thanks to that experience, I work in the epilepsy genetics program of Boston Children’s Hospital and I will be applying to medical school next year. Every day I am driven by the hope to help underserved, underrepresented, marginalized, and vulnerable populations to synthesize a change in accessibility and quality health care for them. To the donors, I want to say thank you. Thank you for giving me and young students like me the opportunity to dare to dream big, and for your commitment to investing in the lives and futures of Regis students.

Let It Shine Gala celebrates Women in STEM and pushes the Now We Fly Campaign over its $40 million goal.

The Let It Shine Regis Gala, now in its fourth year, has raised millions of dollars for student scholarships—all of which is included in the comprehensive Now We Fly Campaign. On October 23, 2019, during Massachusetts STEM Week, Regis honored world-renowned researcher Patricia A. D’Amore ’73, PhD, MBA, with the university’s Shining Example Award. D’Amore, director of the Schepens Eye Research Institute, was honored for her groundbreaking work that helps treat various ocular vascular diseases affecting millions of people worldwide every year.

“Pat has made significant contributions to the field of STEM, including serving as a mentor to countless colleagues,” says Regis President Antoinette M. Hays, PhD, RN. “We are so proud that she got her start in the science labs at Regis.”

“My parents valued education and allowed me to thrive as the first in our family to go to college,” says D’Amore. “STEM at Regis is a major focus of their teaching and learning. It’s important to have STEM training for women because they need the encouragement to go in the direction of a traditionally male-dominated field.” 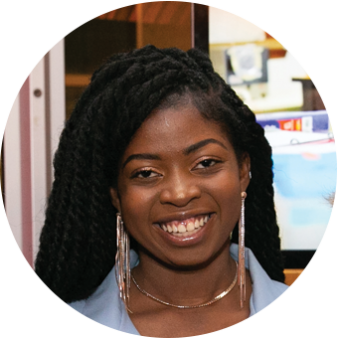 “Regis has contributed to my growth by helping me connect to others throughout leadership roles—including being an Orientation Leader. It was an amazing opportunity to be there for the incoming students and see both their excitement and fear of the unknown. The experience pushed me out of my comfort zone, and I was happy to be there for them in a way I did not think I could be while being an introvert. I was able to share my experiences, answer all their questions, and watch with gratitude as they started to open up more with each other.

The scholarships I received helped me to stay strong and believe in myself, knowing that others believe in me too. Thank you to my donors—for not seeing me as a number, but as a person whose hard work is worthy.” 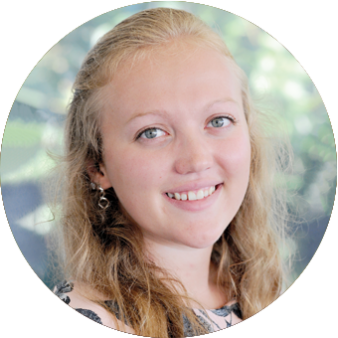 “Without the Flatley Scholars Program, I would not have been able to accept my dream internship at Boston Children’s Hospital as a genetic counseling and research assistant, a position that has prepared me to enter the workforce after graduation.

Regis has helped me soar by providing opportunities through work study and volunteer positions that have really given me confidence and broadened the skills that will carry me into the future.”

Special thanks to all Let It Shine supporters!