“Pat has made significant contributions to the field of STEM including serving as a mentor to countless colleagues,” said Regis President Antoinette Hays, PhD, RN. “We are so proud that she got her start in the science labs at Regis.”

The Let It Shine Gala, now in its fourth year, has raised millions of dollars for student scholarships.

“My parents valued education and allowed me to thrive as the first in our family to go to college,” said D’Amore. “I think it's important to give back because everybody else should have the same life-changing opportunity I did.”

Regis honored Dr. D’Amore and highlighted the university’s dynamic STEM research during Massachusetts STEM Week 2019, a statewide effort to boost the interest, awareness and ability for all learners to envision themselves in STEM education and employment opportunities.

“STEM at Regis is a major focus of their teaching and learning,” said D’Amore. “It's important to have STEM training for women because they need the encouragement to go in the direction of a traditionally male-dominated field.”

The Victor and William Fung Foundation has donated $5 million to establish the Fung Scholars Program at Regis.

Maria Vertkin ’11 is one of five recipients of the 2017 Paul and Daisy Soros Fellowships for New Americans. Vertkin rose to the top of nearly 2,000 applicants for the $90,000 graduate school fellowship, which recognizes outstanding immigrants and children of immigrants in the United States under the age of 30. 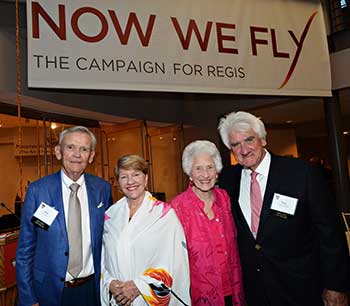 Regis, a leading Catholic university in Greater Boston, is soaring into the future with the launch of a $40 million comprehensive campaign. Now We Fly: The Campaign for Regis is the most ambitious fundraising initiative in the school’s 90-year history.